Press Release
MAY 2019
FOR IMMEDIATE RELEASE

Whittley Marine, Victoria’s premier production boat builder since 1953, is set to release the new Sea Legend 20 Outboard (SL 20 OB) model at this year’s Melbourne Boat Show. The new release is available, with a Yamaha Outboard F 130 four stroke and dual axle Mackay Trailer from $69,990, including on water costs. The SL 20 OB model will be on display at the Melbourne Convention Centre from 13-16th of June on the Whittley Marine stand # D4.

The new release model with an attractive price point, was born from consumer feedback which requested a Yamaha Outboard powered version of the Whittley brands, off shore performance 6.3 meter, SL 20 hull. The new release is also available, with the option of an innovative new ‘Coast Tourer Edition’ hard top with a full length screen and sliding side widows, ideal for customers wanting to escape the elements.

Genevieve Whittley, Sales Assistant at Whittley Marine, had this to say about the exciting new model announcement. “We have listened to feedback from our past, future and existing customers and are thrilled to, in response, to offer a smaller hard top or soft top outboard powered SL model, with the new SL 20 OB launch. Moving with market trends and needs is important to us and we can now offer potential consumers a locally built boat designed around their needs which boasts a point of difference to larger mass-produced boats for global markets. A boat designed for Australian’s and built right here in Victoria for our unique boating conditions.”

The rear fishing area has also evolved and been redesigned with a new flat back rear transom offered to maximize the rear fishing area, which has previously been taken up by the engine bonnet on the stern drive model. Combined with standard premium rear rubber flooring and twin ice/fish boxes (doubling as a seat), the rear work area is designed to cater for the most serious of fishermen’s needs, or can easily convert to the perfect family or entertaining area with the side seat and table option available for the rear.

The new model is the first to be developed at Whittley’s new 5,500 sqm purpose-built boat building and sales facility located in Melbourne. The Research and Design department are currently in full swing with five new Whittley models planned for release over the next two years; all developed and to be built in Australia, at Whittley Marine’s automotive standard new facility.

“The new SL 20 OB package can be optioned up to suit customers budgets and needs, with prices ranging from $69,990 for the soft top model, to the hard top ‘Coast Tourer Edition’ available from $79,490. All SL 20 OB packages are factory rigged to be powered by a Yamaha F 130 or F 150 four stroke power option and are packaged on a dual axle Mackay Trailer. Whittley has a strong history of working with its key partners, to offer affordably priced boat packages to the market, and this is shown again with the new SL 20 OB release, with every package leaving the factory turn key and ready to go.” Ms. Whittley said.

The new SL 20 OB offers consumers the option to easily set their package up as an off-shore weapon, a family overnighter, or both; a unique benefit of the SL series. This boat shouts adventure and endless memories, without conventional fishing boat confines. Coupled with the convenience and maintenance free nature of a Yamaha Outboard, consumers can expect a lower cost of ownership, ensuring more time can be spent on the water for less in a boat that doesn’t have limits or compromises, in its many applications for use.

Ms. Whittley continued to say that. “As with all the SL series by Whittley, boat owners get more than just a blood and guts fishing boat, with the ability to overnight on the vessel comfortably due to many of Whittley’s traditional cruiser appointments as standard. Sea going capabilities are without compromise, with SL models featuring one of the industries deepest vee at a 23-degree deadrise, ideally matched to the power offered from a premium Yamaha four stroke outboard. We believe that the new release of the SL 20 OB builds on its award-winning legacy with these new features, only elevating it to unprecedented family sports fishing boat heights.”

Whittley Marine, will have on display over twenty five new Whittley Fiberglass Boats & Clearwater Alloy Boats, powered by both Yamaha Outboards and Volvo Penta Stern Drives at stand # D4 at the 2019 Melbourne Boat Show, 13- 16 of June at the Melbourne Convention and Exhibition Centre.

About Whittley Marine
Whittley Marine is a third-generation Australian boat-builder based in Melbourne. This family-owned and operated company has focused its resources on providing high-quality boats to boating families since 1953. A marine industry innovator, Whittley’s award-winning range of family cruisers and fishing boats truly offer “A Boat for All Seasons” – versatile boating solutions that can be enjoyed all year round. 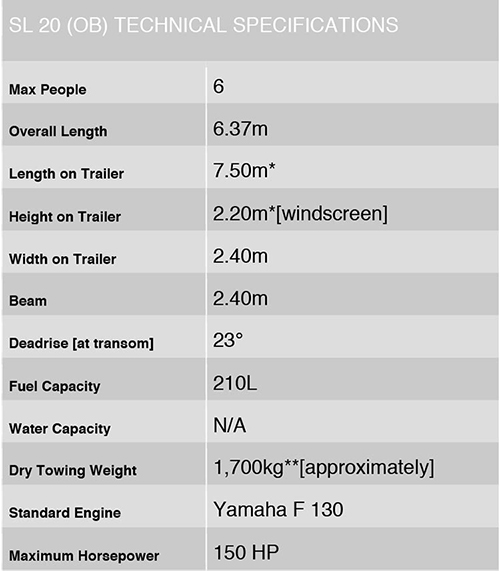