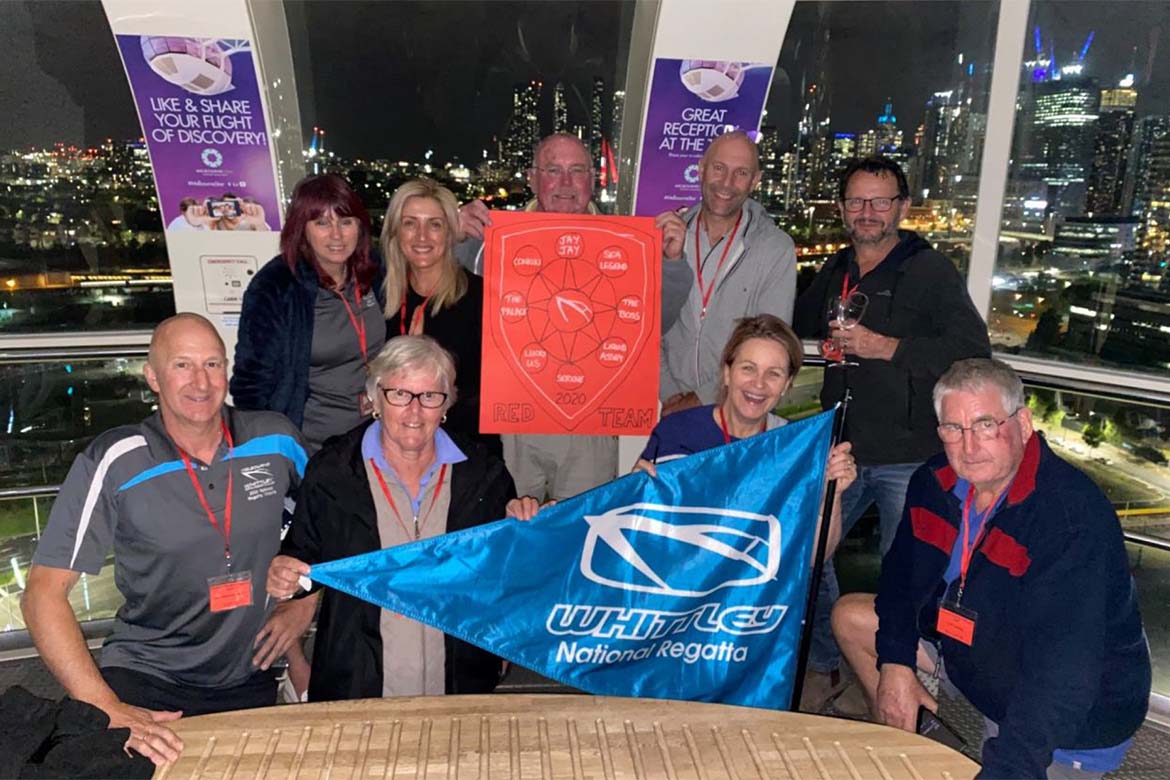 To all Members, Regatta attendees and Whittley Owners Australia wide,

Thank you to all sponsors and the Whittley owners who attended the 2020 National Whittley Regatta held at Melbourne City Marina between the 27 February and 1 March 2020.

I hope you all had as much fun as I did and enjoyed the sensational venue – Melbourne City Marina and how we showcased Melbourne, Port Philip Bay and our two Rivers. You have all been an integral part in making this Regatta a roaring success.

Thank you to the Regatta Organising Committee managers and their teams who co-ordinated all activities prior to, during and after the Regatta

Well was the Regatta, “A stress free, fun time in Melbourne”? I think the answer is YES!

Did we get a lucky break in timing of the Regatta? Again, I think the answer is definitely YES!

How did we manage to pick a week after we have had drought and fires, to then have no rain, with only one of 9 scheduled cruises requiring alternative transport, co-ordinated 4 tall ships to arrive at Williamstown, Naval ships and Submarines to dock in the Yarra River, have an inflatable raft regatta on the Maribyrnong River and all before lock down of the entire country because of a coronavirus!!

Amazing! Sometimes it can just be, “Lucky Us!” 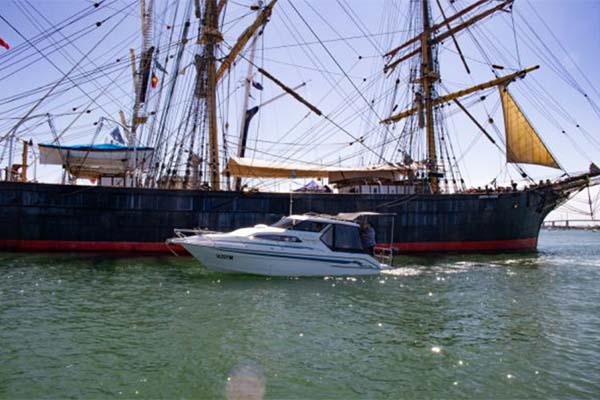 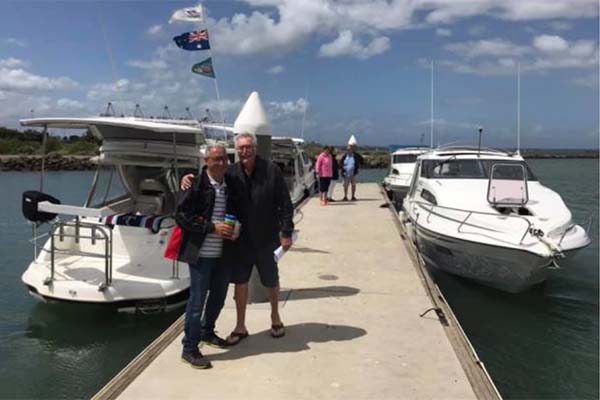 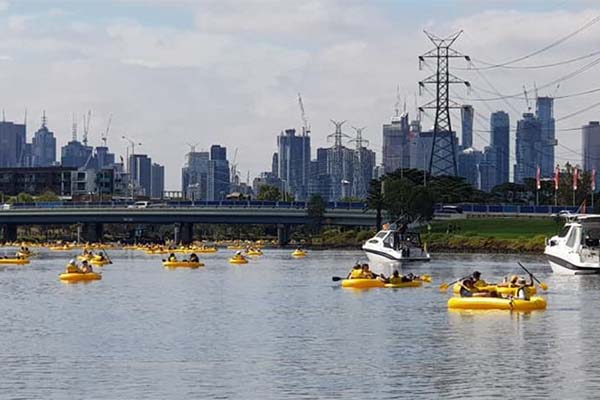 Here is a recap of the Regatta:

Our interstate attendees commenced arriving from Wednesday 26 February 2020 and were greeted at the Warmies boat ramp in Williamstown by Mario and his team – Peter, Tony & Gemma. What a great job they did in transporting everybody’s car and trailer to our secure parking area as well as ensuring all boats were launched safely and directed up the Yarra River to Melbourne City Marina.

Introductions and an outline of the Regatta was presented by members of the Organising Committee. Then everyone was briefed for the first team challenge. Each regatta team received a poster-sized paper in their team colour to design their team shield. All while enjoying a complimentary drink in their private team viewing pod.

We were able to look down at our boats moored in the Melbourne City Marina, as well as view the beautiful Melbourne skyline at night. All teams did a fantastic job in designing their Team shields. These were displayed in the Marina lounge for the entire Regatta with a winner chosen on the final night. 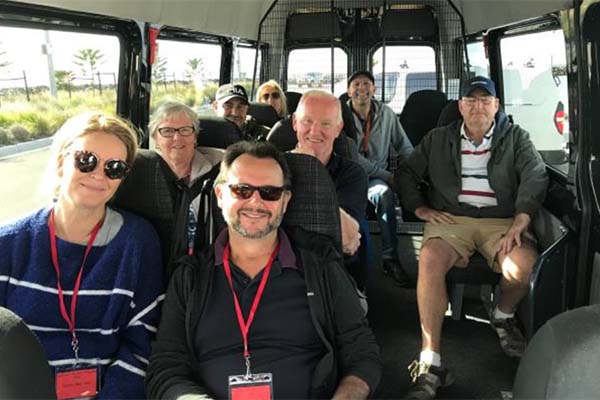 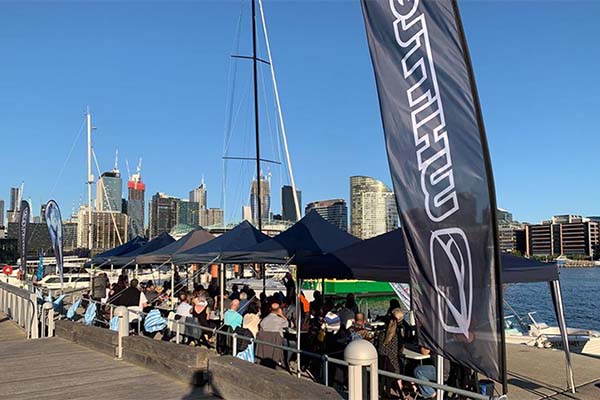 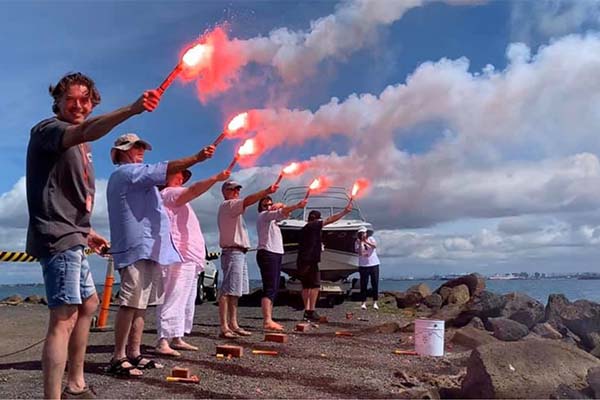 From Friday 28 February to Sunday 1 March 2020 all Whittley crews could get out and about to enjoy cruising to two different locations around Port Phillip Bay and the city rivers. We were extremely lucky with the weather. Friday started of overcast with some wind from the west. This made the trip to Wyndham Harbour a little lumpy but all boats arrived safely. Saturday was perfect boating weather with blue skies and no breeze. Sunday was hot with strong northerly winds. This saw us change the Wyndham Harbour cruise to a bus ride.

Our cruises were all very different and showcased different areas of Melbourne. The City Cruise on both the Yarra & Maribyrnong Rivers was dependant on tides times to get under the iconic Yarra bridges. The East and West coast cruises on Port Philip Bay, where destination cruises, designed to allow you to cruise to a location to enjoy an activity you would not normally do while cruising on your Whittley.

Our East coast cruise saw us head downstream on the Yarra River, under the mighty Westgate Bridge, out into Port Phillip Bay to St Kilda Marina. On our way to St Kilda Marina, we past by Station Pier where the cruise ships dock and the Spirit of Tasmania leaves daily on her way to Devonport. Cruised by the inner city beaches of Port Melbourne, Albert Park and St Kilda. At St Kilda marina, we were met by Peter Dunn and his team of volunteer coast guards who gave us flare training. We were able to let off the orange and red flares in the middle of St Kilda without causing an emergency. It was great fun! Those flares burn red hot and it has provided us knowledge on what to do in an emergency on the water. We definitely learnt not to drop any flares in your boat or your will burn a hole in it!! We then cruised further down the bay past the famous Brighton bathing boxes to the wreck of the Cerberus. Some teams them cruised back to St Kilda pier where they had an ice cream and visited the local fairy penguin colony.

Our West coast cruise took us out into Port Phillip Bay, passing by Williamstown on Hobson Bay and past the western suburbs of Melbourne to arrive at Wyndham Harbour in Werribee. From there we were greeted by Mark and JB who helped us berth and directed us to the waiting bus that took us to the Werribee Open Range Zoo. We all hopped on the safari bus that took us around the zoo where we were lucky enough to see antelope, rhinos, hippos, giraffes and zebra’s. We then headed back to Wyndham Harbour for a delicious lunch overlooking the Marina, then back on our boats to Melbourne City Marina. On our return trip we cruised past the various tall ships that were anchored in Hobson Bay for the Williamstown Seafest Carnival.

Our City cruise was a combination of the two rivers – the glitzy Yarra and the tranquil Maribyrnong that flow through Melbourne. Both rivers gave our Whittley crews different experiences. The Yarra River flows through the CBD and past a lot of Melbourne’s famous landmarks – i.e. Crown Casino, MCG, Melbourne Park, Flinders Street Station, etc. While the Maribyrnong has a more country feel to it with open parklands, walking/running trails, bike paths, rowing clubs. Most teams enjoyed a coffee and cake at Edgewater Lagoon.

Friday night we enjoyed a sit down pasta meal in the Marina lounge. We had Andrew from Dunbier/Mackay trailers provide us with an insight on how trailer braking systems operate and the importance they play in transporting our boats to our cruise destinations. We enjoyed his interactive presentation that involved “willing” volunteers from our Regatta attendees. An hilarious presentation that had all 82 Regatta attendees in stitches of laughter. All those who enjoyed Andrews presentation will agree with me when I say it was, ”A Hunker, Hunker burning love” type of presentation! Members of the Dunbier family also attended as our special guests. Simon from AquaPower Marine gave a presentation on Volvo Penta engines. There was some lucky door prizes provided by Garmin and Fusion and we auctioned off a full Volvo Penta service from AquaPower Marine. The Entertainment Team got everybody thinking with a 30-question trivia quiz.

Saturday night we were able to enjoy “dinner on the dock”. Tables and marquees were set up on the marina concourse where we could enjoy the magical lights of The Docklands and the views across the water to the Bolte Bridge. A big thank you to everybody who helped set up – it was a great team effort. It was a perfect evening for dining under the stars. The roast dinner was delicious!! We had Nick Savva from SavWinch provide an entertaining presentation on the dock telling us about his family business and then drawing two lucky door prizes of SavWinch anchors won by John Beckman and David Kudiak. A big thank you to the entire Melbourne City Marina management team, for their full support for this crazy idea to put 90 people on the floating pontoon Marina Dock, to enjoy a full sit down two course meal, with a view of the Marina and Melbourne skyline that no one has ever attempted before. It was amazing and looked fantastic, and I hope you all enjoyed this as much as I did! 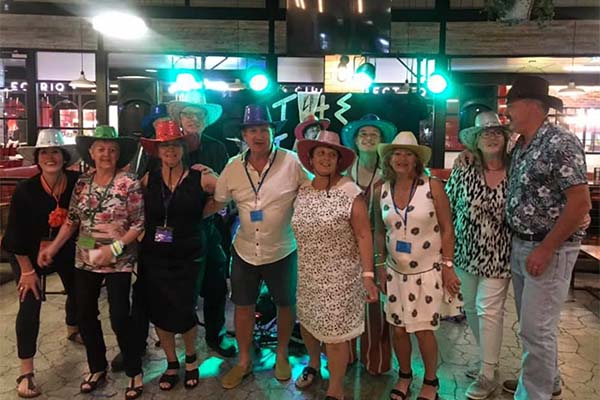 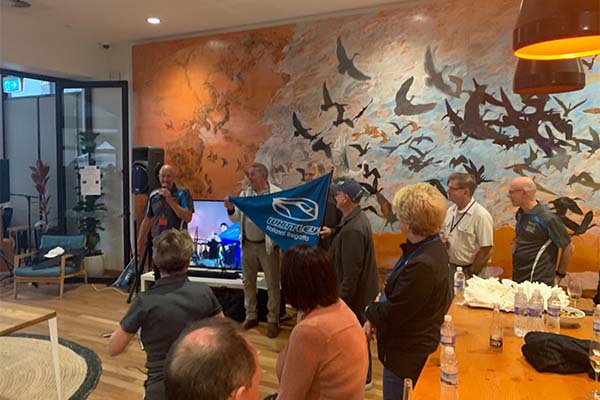 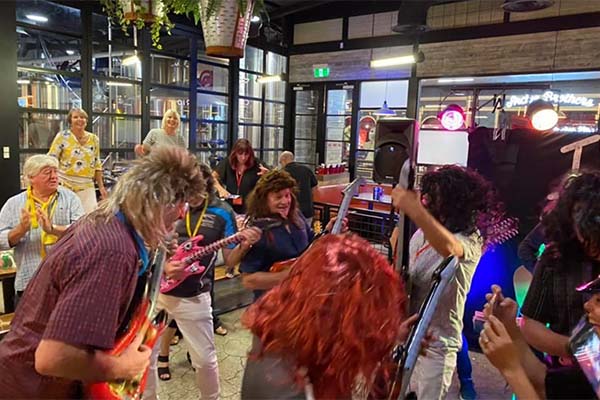 Sunday 1 March 2020 was our final day. After all our teams completed their final cruises / bus trip to Werribee we held happy hour in the Marina lounge where many people were thanked for their efforts in ensuring the Regatta was a success. The winner of the best shield was Red Team led by Jay Davis. The entertainment team provided some other humorous awards for various incidents that happened during the Regatta.

The Regatta flag was lowered, by Mario Greco representing the MWCC, to signify the end of the 2020 National Whittley Regatta in Melbourne. It was handed over to the Ray Mantle, Commodore of the NSW Whittley Club to fly proudly while NSW plan the next Whittley Regatta to be held in NSW in 2 years time. Ray informed us that we will all meet again in 2022 on Lake Macquarie for the next Regatta.

We then all walked to Urban Alley Brewery for the farewell dinner where Neville Whittley provided an update on new boat models being developed by Whittley Marine and extended an invitation for Regatta attendees to tour the Whittley factory on the following day. This was followed by a fun night of singing and dancing with entertainment and music provided by The Jars Bros – acoustic duo band. The 80 strong Whittley crew loved the dress ups including wigs, blow up guitars, hats, tambourines and glasses, provided by the band. It was hard to get some people off the dance floor. At times it resembled the mosh pit at a wide, out of control 21st birthday party. It was fantastic to see everybody celebrating the end of another Whittley Regatta and having fun together and literally all letting your hair down.

Believe me there was some wild, wild hair there to be let down! It was a great way to end a very successful Regatta. Thank you to my great mate Damien, Aka “Hugh Jars” for agreeing to bring the band to the Regatta. Thank you to all who got into to the sprit of the “Whittley Regatta” and made this another fantastic night together with great friends. I really enjoyed every minute of the night and the entire Regatta.

Thank you to all of you! Finally, I would again like to especially thank all our sponsors who without them we would not have been able to run this Regatta and showcase Melbourne to all our attendees:

And lastly, I would like to thank my wife Lee, for supporting me and assisting me throughout the entire 22 months adventure we have been on, called the 2020 National Whittley Regatta.

What a Fun Time it was!